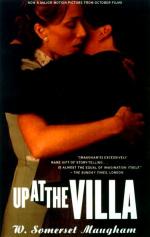 Up at the Villa Short Essay - Answer Key

1. What does narration say of the villa in which Mary is staying?

The story opens with a description of the sixteenth century Tuscan villa at the top of the hill where Mary Panton is staying. The villa is owned by the Leonards, who have offered it up for Mary's use. From the terrace or the gardens, Mary can see the highest points of the city of Florence.

2. How has Mary been spending her time lately and what bearing does that have to do with Mary being at the villa?

Mary has recently spent a great deal of time with lawyers after the death of her husband. She says that he'd managed to squander all the money he'd had and that her purpose in being at the villa is to figure out what she should now do with her life.

3. What does Mary think about Edgar's job prospects?

Mary is at the villa awaiting the arrival of Edgar Swift. Edgar has told Mary that he's been called to Cannes to see a man named Lord Seafair. Mary believes that once there, Edgar will be offered a position in the government.

Up at the Villa from BookRags. (c)2021 BookRags, Inc. All rights reserved.