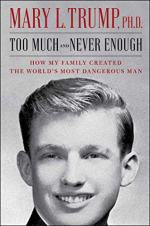 Too Much and Never Enough Fun Activities

Design a poster that declaims your fictitious views on Trump's handling of Covid-19.

Collect old photographs of the Trump family from newspapers and magazines and make an album.

Make a sketch of the house that Fred built and where several members of the Trump family lived at different times. Use your imagination about how it looked from the outside.

Write a short memoir by Linda Clapp, Mary Trump's mother, capturing the initial interactions with Freddy when she was a stewardess.

Imagine that you are Mary Trump. Write a personal letter to Donald. Ask him to attend your birthday party.

As Donald Trump, write the script for a speech to be delivered at the opening of the Grand Hyatt.

Imagine that you are dramatizing the episode when Robert and Donald visit Freddy. Write the script of the play.

More summaries and resources for teaching or studying Too Much and Never Enough.

Too Much and Never Enough from BookRags. (c)2021 BookRags, Inc. All rights reserved.