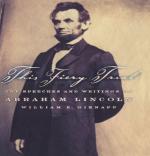 This quiz consists of 5 multiple choice and 5 short answer questions through VI. Events Have Controlled Me.

1. What military stalemate did Lincoln address in "An Idea I Have Been Trying to Repudiate for Quite a Year" ?
(a) Florida.
(b) Mississippi.
(c) North Carolina.
(d) Virginia.

5. What was Lincoln's number one priority in the war according to "I Would Save the Union"?
(a) Humiliating Jefferson Davis.
(b) Freeing the slaves.
(c) Saving the Union.
(d) Maintaining his legacy.

1. What was Lincoln seeking in "I am Not the First Choice of Many"?

2. What skills attracted historians to Lincoln?

3. What was "The Union is Perpetual" written for?

5. What did Lincoln want border states to accept according to "The Incidents of the War Cannot Be Avoided"?