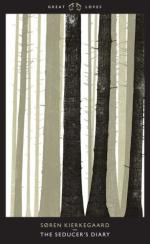 Søren Kierkegaard
This set of Lesson Plans consists of approximately 126 pages of tests, essay questions, lessons, and other teaching materials.

The book opens with a man who has found a collection of essays in a locked drawer in Kierkegaard's house. He writes in the first person and expresses deep anxiety at finding the work that is about to begin and the sultry details within it. He is also afraid that Kierkegaard might pop in on him. The man points out that the work is a diary fully of falsehood; Kierkegaard intended to live poetically, and so produced a diary not historically accurate or a narrative.

2. What does the narrator think about Kierkegaard?

The man wonders whether Kierkegaard intended for the book to be published; he notes that there was a real woman in his life named Cordelia, but he name was not Cordelia Wahl, as it is in the book. He notes that Kierkegaard was more at home in a world beyond this one, and had an exacerbation of the brain. Life was not stimulating enough for him.