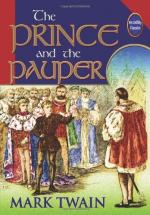 The Prince and the Pauper Test | Final Test - Easy

Mark Twain
This set of Lesson Plans consists of approximately 144 pages of tests, essay questions, lessons, and other teaching materials.

1. Where is Edward sitting that evening?
(a) Outside Buckinham Palace.
(b) Outside Canterbury.
(c) Outside Westminster Abbey.
(d) Inside his bedroom at the castle.

2. What does the old man tell Miles about Edward's whereabouts?
(a) He has gone on an errand.
(b) Edward left with two ruffians.
(c) He has never seen Edward.
(d) He left in the early evening before for London.

3. Who becomes a source of information for Miles while Miles is being detained?
(a) Andrew Henlon.
(b) Sir Robert Blake.
(c) Miles' former nurse.
(d) Blake Andrews.

11. Tom reminds Edward of what event?
(a) Climbing out of the castle.
(b) Losing the great seal.
(c) Edward had put the seal away just before leaving in Tom's rags.
(d) Asking about the great seal's origin.

14. Why is Edward relieved?
(a) The farmer offers Edward a large breakfast.
(b) The farmer will take him to London.
(c) He survived the night in the cold barn.
(d) He is believed when he says he is the King.

1. With whom is Edward traveling?

2. What does Edward decide to write?

5. Who wins the fight between Hugo and Edward?