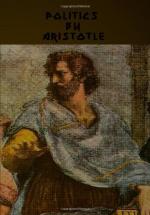 2. When people are younger they should learn to play instruments. When they are older they should do what?
(a) Critique music.
(b) Compose music.
(c) Perform music.
(d) Listen to music.

3. Aristotle says that a ______ state will have everyone recognizing that it is in his best interests to work with the state.
(a) Democratic.
(b) Polity.
(c) Unified.
(d) Healthy.

4. Aristotle believes that a good monarch is not above what?
(a) The will of the people.
(b) The law.
(c) The failure of self.
(d) The promise of power.

5. What is defined as things for rest and relaxation but does not make a good end in itself?
(a) Recreation.
(b) Play.
(c) Peace.
(d) Family time.

6. In oligarchies, what is the group that needs special protections?
(a) The women.
(b) The poor.
(c) The middle-class.
(d) The children.

7. Aristotle says that kings and tyrants rely on personal power combined with what?
(a) Social power.
(b) Military power.
(c) Monetary power.
(d) The law.

9. What is the term Aristotle gives for a government that has a sovereign rule of one?
(a) Monarchy.
(b) Aristocracy.
(c) Tyranny.
(d) Despotism.

10. When a government is seen by the people as being excessive, what will that create?
(a) Patronage.
(b) Factions.
(c) Revolutionaries.
(d) Disparities.

12. What kind of land does Aristotle think is best for a democracy?
(a) Mountainous, rocky lands.
(b) Harbor lands.
(c) Open, flat lands.
(d) River and marsh lands.

13. Aristotle says that the poor need to make sure they do what to the rich?
(a) Take money and redistribute it.
(b) Include them in decisions.
(c) Protect their property.
(d) Tax them.

14. What does Aristotle want in the city center?
(a) The baths.
(b) An academy.
(c) An attractive marketplace.
(d) A temple.

1. Aristotle says that it is important to treat those who will be soldiers for the state how?

2. Aristotle says that kings and tyrants are what?

3. Oligarchies, according to Aristotle, believe that inequalities of wealth indicate what?

4. Aristotle says that in tyranny, personal power, and which of the following, hold sway irrespective of the law.

5. Dionysus of Syracuse ruled on what island?