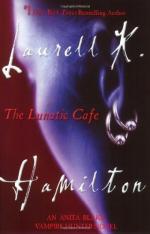 3. Who drains the life force from Gretchen at Guilty Pleasures?
(a) Robert.
(b) Jean-Claude.
(c) An unnamed vampire.
(d) Anita.

8. Who kisses Jean-Claude and drapes herself around him at Guilty Pleasures?
(a) Anita.
(b) Gretchen.
(c) Raina.
(d) Ronnie.

12. What item does Anita refuse to give up at the entrance of Guilty Pleasures?
(a) Her purse.
(b) Her weapons.
(c) Her cross.
(d) Her phone.

13. As Anita and her companions question Smitz, who threatens him, causing him to admit that he killed his wife?
(a) Anita.
(b) His father-in-law.
(c) Raina.
(d) Gabriel.

15. What reason does Kaspar give for betraying other preternatural creatures?
(a) He needs money because of a blackmail scheme.
(b) He is jealous of other lycanthropes because they are strong and he is cursed as a swan.
(c) He needs money to pay a witch to remove his curse.
(d) He prefers the company of vampires to lycanthropes.

1. When Anita puts her arm in the river, who grabs her?

2. What reason does Kaspar give for being cursed as a swan?

3. How was Jean-Claude able to enter Anita's apartment without being let in, while Anita was investigating the skin in the river?

4. Whose nose does Anita break at the home of Kaspar?

5. What is Robert's primary job at Guilty Pleasures?