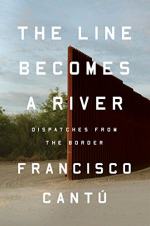 Francisco Cantú
This set of Lesson Plans consists of approximately 170 pages of tests, essay questions, lessons, and other teaching materials.

1. How much does Jose's private immigration attorney charge for her services?

3. What is the word for mass graves where the drug cartels left the bodies of those they murdered?

4. On page 157, what does Hayward tell Cantu about coming back to Border Patrol after a leave of absence?

5. Which organization began an investigation into the large-scale killings of women in Juarez in 2004?

1. What does Cantu's supervisor Hayward at Border Patrol suggest as a change in direction for him that will still allow him to stay with the agency on page 111?

2. What was Cantu's original birth name, and why did Cantu's mother change his name?

3. What does the sicario tell the interviewers started to happen in his personal life after years of working for the cartel?

4. How does Cantu get to know Jose, and how does their friendship grow?

5. What does Beto tell Cantu he thinks is a harbinger of death in his family on page 120?

6. What does Cantu do to try to help Jose when he has trouble with U.S. immigration after leaving the U.S. to visit his dying mother in Mexico?

7. What does Beto tell Cantu about his background and his aspirations for his career with Border Patrol?

8. What does Hayward tell Cantu's new colleagues in Tucson, Beto and Manuel, about Cantu's skills?

9. What did Mexican president Felipe Calderon base his campaign on?

10. What does the sicario, or hit man for a cartel, tell Charles Bowden was an important symbolic part of disposing of the bodies of the people he killed?

Write an essay analyzing what Cantu's attendance at his great-Aunt France's funeral, and his contact with his extended family there, reveals about his feelings and attitudes towards his own ethnic and cultural heritage.

When Cantu is transferred to a desk job in intelligence at the Border Patrol Office in Tucson, Arizona, he has a difficult time adjusting to the work. Write an essay analyzing Cantu's feelings about the change in his job duties and why it is so difficult for him to transfer from field work to desk work.

Cantu discusses the creation of the modern boundary between the U.S. and Mexico, as set out in the 1848 Treaty of Guadalupe Hidalgo, beginning on page 41. Write an essay discussing the process of marking the border itself, as described by Cantu, and which factors were most influential in determining the final boundary that was erected.