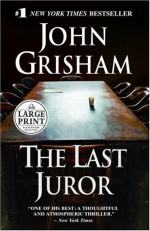 John Grisham
This set of Lesson Plans consists of approximately 119 pages of tests, essay questions, lessons, and other teaching materials.

1. Describe Rhonda Kassellaw as she is explained in Chapter 2.

Rhonda is a widow but is still young and a mother of two. After three years of being alone she begins to feel alone. She begins going to the dance hall where her attacker first meets her.

2. Describe the attack that happens in Chapter 2

Rhonda Kassellaw is followed home by her attacker two times before he finally attacks her. He rapes her at knife point. It is during the attack that her children wake up and walk in on the attack. She tells the children to go to the neighbors and they are able to get out. Rhonda is badly wounded but is able to tell her neighbor who killed her before she dies.

3. How are the Padgitt family members described in Chapter 3?

The Padgitt family lives in an isolated area called the Padgitt Island. They are known for the illegal activities and although never convicted it is said that they may have killed people in order to keep from being arrested. They also are known to purchase officials in order to keep their family out of legal trouble.

More summaries and resources for teaching or studying The Last Juror.