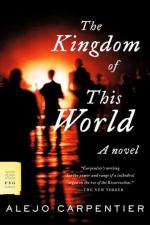 The Kingdom of This World Test | Final Test - Easy

2. What does Pauline Bonaparte begin to superstitiously avoid stepping on in Part Two: Chapter VII?
(a) Broken mirrors
(b) Cracks in the tiles
(c) Shadows
(d) Black cats

3. The rituals of Voodoo resonate with Pauline Bonaparte’s background from where?
(a) Corsica
(b) Tijuana
(c) South Africa
(d) New York

5. M. Lenormand de Mézy spends his time doing what in Cuba in Part Two: Chapter V?
(a) Investing in the stock market
(b) Drinking and practicing Voodoo
(c) Frequenting brothels and libraries
(d) Gambling and going to church

7. Pauline Bonaparte’s world is interrupted when who coughs up blood and collapses in Part Two: Chapter VI?
(a) Her daughter
(b) Her masseuse
(c) Her hairdresser
(d) Her husband

8. What does King Henri Christophe do at the end of Part Three: Chapter VI?
(a) He jumps off a cliff
(b) He shoots himself
(c) He hangs himself
(d) He slits his wrists

11. Soliman engages in an affair with a maid at what palace in Part Four: Chapter I?
(a) Le Bonnet de l'Évêque
(b) Auberge de la Couronne
(c) Borghese Palace
(d) La Tortue

12. One of Pauline’s maids discovers Pauline on the floor with another slave dancing around her holding what in Part Two: Chapter VII?
(a) A sickle
(b) A hatchet
(c) A machete
(d) A frying pan

13. What is the title of Part Two: Chapter VII?
(a) The Solemn Pact
(b) Conch Shells
(c) The Royal Palace
(d) Saint Calamity

1. Part Three: Chapter III is titled “The Sacrifice of the” what?

2. What are the names of the princesses described in Part Three: Chapter II?

3. Who is the replacement for King Henri Christophe’s priest and confessor in Part Three: Chapter IV?

4. What is all that’s left of the chapel at the plantation Ti Noël visits in Part Three: Chapter II?

5. What does Pauline Bonaparte order to begin construction after her arrival on the island in Part Two: Chapter VI?