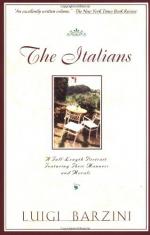 1. What do most Italians think about contemporary capitalism?
(a) They do not understand it.
(b) It is worthless.
(c) It is too difficult to understand.
(d) It cannot be trusted.

3. The confusion about the Mafia is almost always perpetuated by whom?
(a) The Sicilians.
(b) The organization itself.
(c) The media.
(d) The Italians.

4. There are visible signs of material advantages in the North, but there is always the danger of what?
(a) Losing that advantage.
(b) Poverty and insecurity.
(c) Economic collapse.
(d) Spiritual impoverishment and hedonism.

6. Why could this man not achieve practical results?
(a) He was mentally unstable.
(b) He was not organized.
(c) He was too much of a dreamer.
(d) He was not dedicated to his work.

9. What else do Italians think about capitalism?
(a) They appreciate the outward aspects of it but do not believe it truly exists.
(b) They think it is only for the wealthy.
(c) They cannot appreciate anything about it.
(d) They think it requires too much responsibility from the citizens.

12. Most families attempt to remain faithful to what?
(a) The perfect family as possible.
(b) Their government.
(c) Catholicism.
(d) Their friends.

2. In exchange for protection by the Mafia, what happens to people?

3. Another important faction in the geography of Italy is what?

5. What does the word mafia indicate?

The Italians from BookRags. (c)2022 BookRags, Inc. All rights reserved.