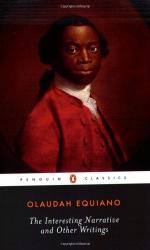 The Interesting Narrative and Other Writings Short Essay - Answer Key

1. What features of the life of the Eboe people as Equiano describes are most interesting or surprising?

Several features of the life of the Eboe people as Equiano describes it are interesting, and some things about their life are also surprising. The things that interest me are their love of music and dancing, because that reminds me of things I've learned about African tribes before, and the fact that women and men live in separate quarters because that reminds me of things I've learned about Muslims, but I don't think that the Eboe people are Muslim. I'm surprised to learn that they believe in a single God, because I thought that tribes so long ago would have worshipped a lot of different gods, like the Ancient Greeks did.

2. Describe what it means for an Eboe man to be designated as "Embrenche."

Being designated as an "Embrenche" was an honor for Eboe men, and it meant that they were a respected elder who helped to run the village. These men were marked by having a scar put on their forehead, which is interesting because it seems like branding, which I always associate with American slavery. Ironically, in the case of Embrenche, the scarring represents being higher in society rather than being lower. It also suggests that the position was permanent.

The Interesting Narrative and Other Writings from BookRags. (c)2022 BookRags, Inc. All rights reserved.