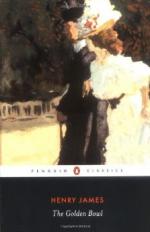 Henry James
This set of Lesson Plans consists of approximately 145 pages of tests, essay questions, lessons, and other teaching materials.

Research popular fashion of the time period in which "The Golden Bowl" is set. Design outfits that would have been worn by a male and female character in the novel.

Create an artistic work in any medium depicting an interesting scene, setting, or character in "The Golden Bowl."

Limericks are humorous five-line rhyming poems. Compose a collection of three to five limericks based on the characters or situations in "The Golden Bowl."

Research life in England during the time period in which "The Golden Bowl" is set. Compose a short story that is set during that time.

Choose an interesting section from the novel and...

More summaries and resources for teaching or studying The Golden Bowl.