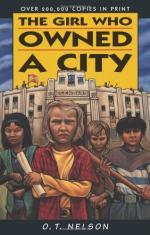 The Girl Who Owned a City Character Descriptions

The ten-year-old girl who comes up with the idea of moving all the children together for safety.

The head of a local gang called the Chidester Gang.

A twelve-year-old who takes care of his young sister and enjoys gardening.

A girl who takes in homeless children plus her two young sisters.

Two of Lisa's neighbors who are struggling to survive before Grandville is formed.

One of the little girls who lives with Jill, she has the idea to use fire extinguishers to help defend against gangs.

The leader of a gang in a nearby town who laughs at the idea of a girl leader.