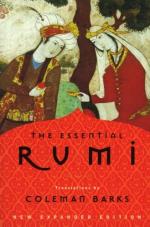 1. Over time, what has Coleman Barks been able to do with Rumi's poems?
(a) Teach them to his children.
(b) Experience them more deeply.
(c) Decode secret messages.
(d) Translate them into five languages.

2. Before responding to the king's command in a poem in Book 1, Chapter 3, what does Ayaz do?
(a) Reads at least forty books to learn how others handled the situation.
(b) Notices how at least thirty other men respond to the command.
(c) Consults with the King's daughter.
(d) Prays to God for guidance.

4. What elevates Rumi's poems beyond a simple collection of ideas?
(a) His use of diagrams.
(b) Rich imagery.
(c) Confounding words.
(d) His references to other cultures.

11. What is one of the central teachings of Rumi?
(a) The search for eternal youth.
(b) The elimination of sin.
(c) The desire for power.
(d) The cultivation of love.

14. In some of his poems, Rumi refers to religious figures:
(a) From fiction.
(b) From different faiths.
(c) Only from his faith.
(d) Only that he knows personally.

15. As the bond of friendship that Rumi writes about between a frog and its animal friend grows, the two animals find that their wish for each other's company:
(a) Turns into a need.
(b) Diminishes over time.
(c) Is discouraged by their own kind.
(d) Is laughed at by others.

1. In Rumi's string metaphor, the string connects two animals by their what?

2. How many additional poems were translated and included in the New Expanded Edition?

3. Most of Rumi's poems presented in this book exhibit what form?

4. Over time, Coleman Barks' feelings about the messages in Rumi's poetry have what?

5. At times the character Hallaj can be tender and loving, but other times he can be what?