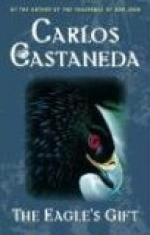 Carlos Castaneda
This set of Lesson Plans consists of approximately 108 pages of tests, essay questions, lessons, and other teaching materials.

3. Who is Don Juan's feminine analogue, according to the remembering of Carlos?
(a) Rosa.
(b) Anne.
(c) La Gorda.
(d) Nagual woman.

4. Which of the apprentices is Carlos closest to? Which one is the one with whom Carlos feels and shares the greatest affinity?
(a) Anne.
(b) Nestor.
(c) La Gorda.
(d) Josefina.

5. Where do La Gorda and Lydia go at the beginning of this section, according to the storytelling?
(a) America.
(b) Home.
(c) School.
(d) Mass.

7. What is the second stage of dreaming in which the light dissipates and the dreamer views a static, frozen tableau?
(a) Dynamic vigil.
(b) Restful vigil.
(c) Dynamic initiative.
(d) Passive witnessing.

12. Who says he/she will meet up with Carlos at a later time since they are destined to work together as warriors?
(a) Rosa.
(b) No one.
(c) Don Juan.
(d) La Gorda.

14. What is the stage of dreaming in which the dreamer takes action?
(a) Dynamic initiative.
(b) Dynamic vigil.
(c) Passive witnessing.
(d) Restful vigil.

1. Which of the apprentices is the one who has lived in the area where the stone ruins rest?

2. The apprentice speaks of the stone ruins in terms of the fearsome _______ and the peaceful tonal structures, which confuses Carlos.

3. Who is NOT one of the Genaros with whom Carlos is reunited in this story as told in the book?

4. What is NOT one of the tasks which the apprentices might have to do when they are dreaming?

5. Carlos remembers when he was a younger apprentice that he was hidden away while ___________ had a lady caller.

More summaries and resources for teaching or studying The Eagle's Gift.