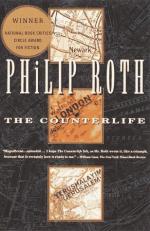 Philip Roth
This set of Lesson Plans consists of approximately 106 pages of tests, essay questions, lessons, and other teaching materials.

1. Who is Henry Zuckerman? What is he diagnosed with?

Henry Zuckerman is a successful dentist. He is diagnosed with a heart problem. The heart problem puts Henry at risk for a heart attack.

2. Discuss the side effects of the medication Henry takes.

3. Discuss Henry's love life and who is involved.

Henry has a love life that involves several people. Henry is married to Carol and also has a mistress named Wendy. Henry takes Wendy as his mistress after breaking off an affair with a Swiss woman named Aria.

4. Who is Nathan? What happens when Henry tries to get in touch with Nathan?

Henry decides he wants to get in touch with his brother Nathan when he ponders the idea of getting surgery in order to fix his sexual impotence. Henry tries to call Nathan, but he hangs up. He then tries to leave a note for Nathan, but tears it up. Henry finally goes through with calling Nathan.

More summaries and resources for teaching or studying The Counterlife.

The Counterlife from BookRags. (c)2020 BookRags, Inc. All rights reserved.