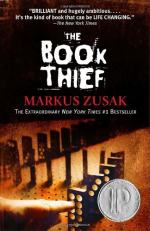 Prologue, A Mountain Range of Rubble, and Part One, The Grave Digger's Handbook

• In the opening of the story, Liesel is traveling by train with her mother and younger brother. Her brother is sick and coughs through the trip. Soon, his coughing stops and Liesel realizes her brother has died.

• Liesel and her mother get off the train to bury the little boy's body and are escorted by two armed guards. While they are burying the body, Liesel spots an abandoned book and steals it before getting back on the plane.

• Once Liesel arrives in Munich, she is handed over to the state foster care system. She is taken in by Rosa and Hans Hubermann. Liesel is shocked by how vulgar Rosa is, although she is not cruel.

• Hans Hubermann is a kind man who convinces Liesel to take a bath a few weeks after arriving to his...