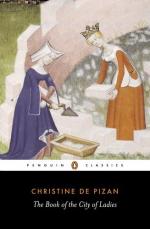 The Book of the City of Ladies Fun Activities

In groups of two or three, choose a scene from this feminist novel to rewrite slightly to fit into a different genre. Enact your scene for the class.

In groups of three or four, choose a scene and silently act it out. Your classmates will guess which scene you have chosen.

Rewrite one of the stories from this novel into a poem.

Find a story with a similar plot and summarize it to present to the class.

The City of Ladies in the Modern Age

Separate into groups of three or four. Choose a scene from the novel and rewrite it as a modern adaptation. Enact your scene.

Choose your favorite character. Explain to the class what happened in this novel while adopting that character's persona.

Draw your favorite scene from the novel...

More summaries and resources for teaching or studying The Book of the City of Ladies.

The Book of the City of Ladies from BookRags. (c)2021 BookRags, Inc. All rights reserved.