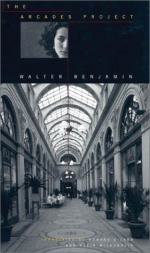 Walter Benjamin
This set of Lesson Plans consists of approximately 106 pages of tests, essay questions, lessons, and other teaching materials.

• Chapter 1 - The book starts by introducing the 19th and 20th centuries that the book will cover.

• The book uses a number of different fonts that clarify which sources are being used.

• The author begins discussing the arcades that were built in Paris.
• The author is moved by surrealism and he claims it influenced the writing of this book.

• The author discusses Theodor Adorno who has created a literary construct called a constellation, also known as a convolute.

• A convolute is a group of notes that are all within the same topic.

• The convolute derives from German where the author is from.

• Chapter 2 - There are a number of face pages in the book.

• The face pages range from French to Asian decorations.

• The author discusses the factors that led to the success of arcades in Paris.
• The boom in the textile industry of...