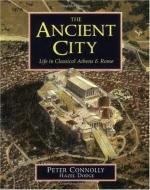 Peter Connolly
This set of Lesson Plans consists of approximately 115 pages of tests, essay questions, lessons, and other teaching materials.

2. These types of Athenian houses are often built in connection to other houses.
(a) Semi-detached houses.
(b) Workshop houses.
(c) Hill houses.
(d) Block houses.

5. Early Athenian tragedies are based on these.
(a) Well known legends.
(b) Personal stories.
(c) Children's literature.
(d) Bible stories.

6. Authors suggest there is a link between the theater and this.
(a) Athena.
(b) Zeus.
(c) Xerxes tent.
(d) The Olympic games.

8. These allow state payments to be made for performance of civic duty, thereby allowing the poor to participate in politics.
(a) The Boule and tributes.
(b) The Boule and levies.
(c) Taxes.
(d) Tributes and levies.

9. At the age of eighteen, Athenian boys must attend this.
(a) Etiquette lessons.
(b) Civil assemblies.
(c) Charm school.
(d) Military training.

10. Wealthy sons of Athenians are tutored by these, beginning around age seven.
(a) Philosophers.
(b) Teachers.
(c) Women.
(d) Slaves.

11. This is the market place and political center of Athens in the fifth century.
(a) Attica.
(b) Persia.
(c) Agora.
(d) Forum.

12. Sophocles and Euripides are considered the best of these.
(a) Greek musicians.
(b) Greek comedians.
(c) Greek playwrights.
(d) Greek performers.

1. These rooms are so small, they are difficult to distinguish among the ruins of Athenian ruins.

2. The oligarchic government of thirty pro-Spartan aristocrats who rule the Athenians following the war with Sparta is called this.

3. The city is accessed through many of these built into the city walls.

4. In around 950 BC, Athens moves from a monarchy to this form of government.

5. This many main Gods are worshiped in Athens.