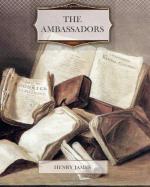 Henry James
This set of Lesson Plans consists of approximately 111 pages of tests, essay questions, lessons, and other teaching materials.

Based on the description of the characters’ activities as well as Chad’s description, build a diorama of Chad’s apartment in the Boulevard Malesherbes.

Strether loves the thick-crusted bread found in Parisian restaurants. Look up a recipe for French bread and bake a loaf.

Srether frequently describes Madame de Vionnet’s apartment as resembling the First Empire, and having a Napoleonic appearance. Research Napoleon and make a timeline of French history from the French Revolution up through the year 1900.

Choose 12 songs that you think are appropriate to the mood of the novel. Assign a song to each book of the novel and make a list.

Write a thirteenth book for the novel in which you describe Strether’s life back in New England.

More summaries and resources for teaching or studying The Ambassadors.

The Ambassadors from BookRags. (c)2022 BookRags, Inc. All rights reserved.