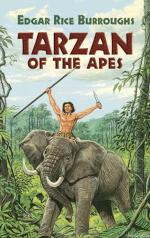 Tarzan of the Apes Chapter Abstracts for Teachers

• In Chapter 1, the narrator writes that John Clayton, Lord Greystoke, is commissioned to make an investigation of conditions in a British African Colony.

• The narrator describes Lord Greystoke as being the best type of man, strong, moral and handsome. He has been wed to Alice Rutherford for three months when he is given the assignment.

• When John and Alice arrive in Freetown they charter a small sailing vessel and then they disappear.

• Lord Greystoke stops a captain from killing a deck hand on the boat they had chartered. The captain is furious with Lord Greystoke and does not eat with the couple again.

• Because he saves a crew member Lord Greystoke is told, secretly, that the crew intends to mutiny. Lord Greystoke decides not to tell the brutal captain but his wife disagrees.

• Lord Greystoke obeys his wife and tries to tell the captain but the...

More summaries and resources for teaching or studying Tarzan of the Apes.

Tarzan of the Apes from BookRags. (c)2020 BookRags, Inc. All rights reserved.