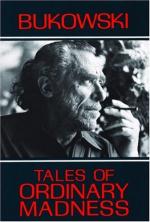 Charles Bukowski
This set of Lesson Plans consists of approximately 127 pages of tests, essay questions, lessons, and other teaching materials.

1. Describe Duke's relationship with Lala in A .45 to Pay the Rent.

Duke loves his daughter Lala dearly, and he caters to her every whim and even confides in her how terrified he has been all his life.

Charles Bukowski is pretty apathetic and aimless. He accepts the fact that he will be in prison for a while and doesn't worry about how his outside commitments may or may not suffer.

3. Describe the moral code of prison in Scenes from the Big Time.

The moral code of prison is more similar to beasts than man, where ugliness and brutality trump beauty, and strength is more important than goodness.

4. How do pain and violence play a role in Nut Ward East of Hollywood?

The narrator is proud to see his own wound or the source of his pain, while Mad Jimmy is not aware of violence around him, even though he perpetrates it.

More summaries and resources for teaching or studying Tales of Ordinary Madness.