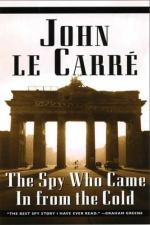 • The text opens at a border crossing station between East and West Germany in 1960's era Cold War.

• Alec Leamas, the protagonist, and his CIA contact wait on the Western side of the border. They are waiting for 2 people to try to make it across.

• One woman, Elvira, makes it across safely in a car. She tells Leamas that all of her spy network in East Berlin has been arrested, and that her boss, Karl Riemeck, is coming behind her on his bicycle.

• Much later, under cover of darkness, Karl attempts to cross the border, but is shot by the East German border guards. His fate is unknown.

• Leamas flies home to Germany and meets with Control, who is the head of the British intelligence agency.

• Leamas expects to be fired because of his failed intelligence operations in East Germany. Instead, Control asks him to go...

More summaries and resources for teaching or studying The Spy Who Came in from the Cold.

The Spy Who Came in from the Cold from BookRags. (c)2020 BookRags, Inc. All rights reserved.