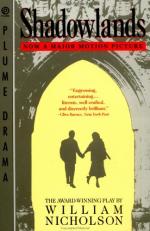 1. Where does scene 1 open? Describe the location. Who is present as the scene opens?

Scene 1 opens in England in the 1950s. There are two rooms, one within the other, separated by a translucent screen. Lewis enters the stage with a newspaper.

C.S. Lewis is a writer and one of the main characters of the play. He is also referred to as Jack. At the time that the play opens, Lewis is in his mid 50s. He is well-dressed and his is very well-spoken and articulate.

3. What does Lewis do in this scene? Who does he address? What topics does he discuss?

After Lewis enters the stage, he addresses the audience as if he were giving them a lecture. He discusses topics such as love, pain, suffering, and God. He puzzles over God's existence and how this world is a shadow of the next world.