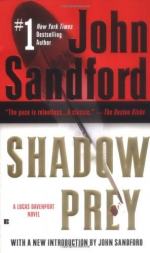 John Sandford
This set of Lesson Plans consists of approximately 106 pages of tests, essay questions, lessons, and other teaching materials.

This character is a Lieutenant on the Minneapolis police force and mainly does intelligence work. He has networks he has developed over time, which are important in solving the ritual murders in the current case. He does have help from the rest of the police force, so he is not a total hot shot. Lucas has his own methods of investigating and is not above bribing someone to get information, as is seen when he gives Yellow Hand coccaine for information on Bluebird. The other police are aware that Lucas does not always do things the conventional way, which is seen when the officer watching Yellow Hand is told to leave him with Lucas. The officer wonders if the rumors about Lucas's methods are true. Lucas's character is neither all good nor all bad but something in between.

This character is a Lieutenant...