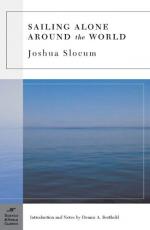 1. Chapter 1 begins with Slocum in Nova Scotia. How is the Canadian province described?

Nova Scotia is described as being a heavily populated Canadian province on the southeastern tip of the country. The province is surrounded by the Atlantic Ocean and boasts many bays and inlets affording opportunities for fishermen and other maritime activities. The capital of Nova Scotia, Halifax, is well known for its economic opportunities.

2. How does Joshua Slocum describe the people of Nova Scotia?

It is clear by the location of the province that the people must be made of stern stuff. According to Slocum, "The people of this coast, hardy, robust, and strong, are disposed to compete in the world's commerce, and it is nothing against the master mariner if the birthplace mentioned on his certificate be Nova Scotia."

3. What is Joshua Slocum's relationship with his father? How is John Slocum described?