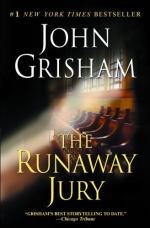 John Grisham
This set of Lesson Plans consists of approximately 138 pages of tests, essay questions, lessons, and other teaching materials.

This quiz consists of 5 multiple choice and 5 short answer questions through Chapter 13 | Chapter 14.

1. What opinion does the Colonel have about smoking?
(a) He believes it is very addictive.
(b) He thinks giving it up just takes willpower.
(c) He has already made up his mind about the case.
(d) He thinks that it cannot kill you.

2. What causes the jury to have a particularly strong reaction during the testimony?
(a) The lunch cutlery provided by the deli.
(b) Video of Wood's testimony.
(c) Fitch's cross examination.
(d) Pictures of Wood's lungs.

4. Why does Fitch want to find the girl who wrote the note?
(a) Because they want to hire her.
(b) Because she lied to him.
(c) Because the information in the note was accurate.
(d) Because she is ruining their case.

5. What does Easter do while Dr. Kilvan is giving his testimony?
(a) Stares at Fitch within the courtroom.
(b) Sends looks to Stella trying to keep her calm.
(c) Takes notes about the facts that Dr. Kilvan is sharing.
(d) Sends a note to the judge requesting another conference.

1. While the jurors are waiting for court to start, how do they mostly divide up into groups?

2. What does Marlee ask one of the deputies to do?

3. Why does it seem that SuperHouse is interested in the case Shaver is on the jury for?

4. Where does the beginning of Chapter 2 take place?

5. Why doesn't Stella leave the hotel room for most of her trip when she and her husband go to Miami?

More summaries and resources for teaching or studying The Runaway Jury.