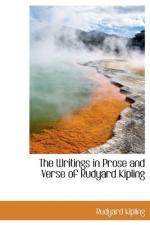 Rudyard Kipling
This set of Lesson Plans consists of approximately 129 pages of tests, essay questions, lessons, and other teaching materials.

1. What is Boanerges Blitzen 's stature in his profession?
(a) He is the main scholar of his profession.
(b) He is well known.
(c) He is less than famous.
(d) He is the leader of a faction.

2. What do the people who led the men to death in "Mesopotamia" try to do?
(a) Make money with speaking engagements.
(b) Try to find a new cause.
(c) Belittle the cause.
(d) Try to recruit other to sent to war.

3. What future does the man in "The Galley-Slave" see for the ship?
(a) Being destroyed by the enemy.
(b) Being sold for scrap.
(c) Being sent to help others.
(d) Being decommissioned by the king.

5. Why is the sergeant in "Pharaoh and the Sergeant" sent to Pharaoh?
(a) To present the respect of the King of Britain.
(b) To help him take down a rebelion.
(c) To keep him in line with what England wants.
(d) To kill him.

7. What does the character of "McAndrew's Hymn" try to make excuses for?
(a) His years of not going to church.
(b) His years neglecting his children.
(c) His behavior toward god.
(d) His lack of morality in war.

13. What message does "The Masque of Plenty" try to convey?
(a) That the Monarchy should be taken down.
(b) That war can be justified.
(c) That everyone has problems, however happy they appear on the outside.
(d) That goats are dangerous.

14. What are the main characters of "The Native Poem" taught to be respectful of?
(a) Their parents.
(b) Their Army.
(c) Their motherland.
(d) Their Queen.

1. What is the man in "The Lament of the Border Cattle Thief" use to stealing?

2. What does the man in "The Betrothed" choose over his fiancee?

3. What is the lady in "Delilah" convinced to tell?

4. What does the character in "The Ballad of the King's Jest" love to do?

5. What do the attitudes of the men in "Mesopotamia" bring to the human race?