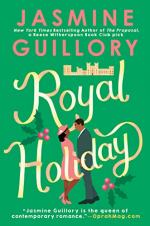 Jasmine Guillory
This set of Lesson Plans consists of approximately 172 pages of tests, essay questions, lessons, and other teaching materials.

• The following version of this book was used to create this Lesson Plan: Guillory, Jasmine. Royal Holiday. Berkley, New York, 2019.

• This book is written from the third person point of view in the past tense.

• In Chapter One, Vivian Forest and her daughter Maddie Forrest arrived in Heathrow airport just before Christmas.

• Several weeks earlier, Maddie, a professional stylist and designer, had called her mother Vivian to ask if Vivian wanted to spend Christmas with Maddie in England.

• Maddie's old mentor, Amelia, had started working for the new Duchess in the British Royal Family as the Duchess's stylist.

• But Amelia was pregnant with twins and had to go on bed rest, so she asked Maddie to fill in for her as the Duchess's stylist over Christmas.

• Maddie accepted and asked Vivian to come with her to England, to stay at the Duke and Duchess's...