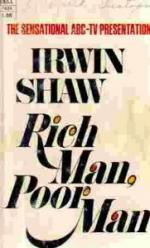 Irwin Shaw
This set of Lesson Plans consists of approximately 124 pages of tests, essay questions, lessons, and other teaching materials.

1. How are Rudolph, Gretchen and Thomas introduced in the story?

Rudolph is introduced as the shining star of the family, the one who helps without being asked, and who has a potentially bright future ahead of him. Gretchen is introduced as the lone female child of the family, older than her two brothers. Thomas is the outcast in this family, the one who has been lost in all the attention given to the two older children.

2. How is Gretchen's meeting with Teddy Boylan so prophetic for her brother's lives as well as her own?

Gretchen is on this road in order to meet with two soldiers from the hospital where she volunteers, but instead she meets up with Teddy Boylan. If she had not been intent on meeting the soldiers, Gretchen would not have been on the road and she would not have begun a relationship that will affect the lives of all the people around her, including Rudolph and Thomas.