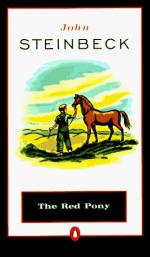 1. What is a common breakfast in the Tiflin household?

2. Who does Jody first show his new pony to?

3. What is the Gitano carrying when he first arrives at the Tiflin ranch?

4. What kind of gun does Jody have?

5. How does the pony's coat and mane look when Jody first sees them?

1. What does Jody put into the past once he starts preparing to take care of Nellie and, once it comes, the new horse?

2. What signals to Jody that Billy Buck and Carl have something unusual planned on the day he is given his pony?

3. Why does Carl ask Gitano if he has relatives anywhere nearby?

4. What familiar story does Grandfather start to tell around the fire on his first night with the Tiflins?

5. How does Mrs. Tiflin defend Jody from his father's accusation that he is a "Big-Britches"?

6. Who really teaches Jody how to get ready to ride his pony?

7. What problem does Billy warn Jody about when it comes to Nellie giving birth?

8. What, according to Billy, makes him "half horse"?

9. How has Billy been able to gauge Jody's skill with horses?

10. Why does the stallion break his rope when he sees and smells Nellie for the first time?

Discuss the conclusion of the novel, making sure to discuss how Steinbeck concludes (or doesn't conclude) at least two themes of the novel and what he implies will happen to at least 2 characters in the future.

Foreshadowing is very much a part of _The Red Pony_. Choose three instances of foreshadowing from anywhere in the text and discuss what each instance will come to mean.

Discuss the character of Gitano, making sure to address the following key points: 1) Why does Steinbeck include him in the story? 2) What function does he serve in the text? and 3) What do we learn about at least 2 other characters from their interaction(s) with Gitano?