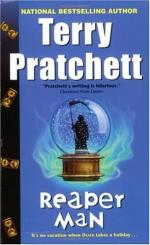 1. What does Bill Door see in a dream after leaving Miss Flitworth's parlor for tea?

2. What is the name of the person who tries to find out why the wizards are stopping traffic to bury Windle Poons?

3. Where do the wizards believe Windle Poons should be buried after he comes back undead?

4. What is the name that Death takes on when he acts as a human?

5. Who is Bill Door able to accurately describe to Miss Flitworth that surprises her?

1. How is Miss Flitwotrh's parlor described in the book?

2. How do Windle's friends react after he comes back from the dead?

3. How is Windle Poons described after the wizards bury him in a coffin while undead?

4. How does the gardener, Modo, react when Windle Poons comes out of his grave?

5. What does the gray robes that the wizards conjure tell them about Death?

6. How is the nature of Lupine's character first described in the book?

7. How does Senior Wrangler try and investigate the inanimate object appearing in Discworld?

8. What happens when Windle Poons realizes Schleppel followed him home after the Fresh Start Club meeting?

9. How are the wizards almost injured by a chandelier in the book?

10. How does Death find a job after taking of the persona of Bill Door?

Examine the concept of principles that is presented in the book. How does Death's principles define him even in his human form as Bill Door, and what does this suggest about the nature of his character?

Discuss the portrayal of the concept of dreams in the book. How does the author use Bill Door's dream about his death to foreshadow and carry the story along, and what purpose might he have for doing this?

Compare and contrast Windle Poons as a wizard to what he becomes when he is undead. How is Windle Poons able to grow more emotionally and find more fulfillment through his undeath and what might the author be saying about the importance of living a full life through his character?