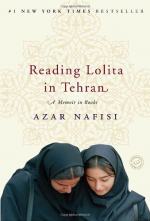 "Reading Lolita in Tehran" is divided into four parts, and each part centers around a novel. The book's title emphasizes only one novel, "Lolita." "Lolita" is the emphasis for the first section of the book. Why do you think that "Lolita" was mentioned in the book title instead of the other novels discussed? Was this a good choice? If not, which of the other novels would have been more suitable and why?

Throughout the memoir, Nafisi returns to the issue of wearing the veil. Write an essay that addresses Nafisi's feelings about the veil. What does the veil represent for Nafisi personally? What does it represent for her professionally? How is the veil used as a symbol in this book?

In his "Letter from the Birmingham Jail (April 1963)," Martin Luther King, Jr. responded to critics who called him an extremist by pointing...

Reading Lolita in Tehran, A Memoir in Books from BookRags. (c)2022 BookRags, Inc. All rights reserved.