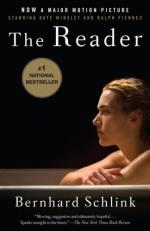 Bernhard Schlink
This set of Lesson Plans consists of approximately 149 pages of tests, essay questions, lessons, and other teaching materials.

7. What floor in the apartment building is the narrator directed to go in the beginning of Chapter 3?
(a) The basement.
(b) The third floor.
(c) The second floor.
(d) The fourth floor.

9. What does Michael shout out in his sleep, according to his brother?
(a) Quotes from a play.
(b) Cries of pain.
(c) Sophie's name.
(d) Hanna's name.

11. In Chapter 16, what type of film does Michael mention he and Hanna particularly like?
(a) A movie based on a Shakespeare play.
(b) A German war film.
(c) A Hollywood Western.
(d) A romantic comedy.

1. What does Hanna not want to acknowledge that she had previously admitted to the court?

2. What illness does the narrator suffer from in Chapter 1?

3. What happens to Sophie?

4. What is Frau Schmitz doing when she lets the narrator into the apartment?

5. What does Michael wear?

More summaries and resources for teaching or studying The Reader.

The Reader from BookRags. (c)2022 BookRags, Inc. All rights reserved.