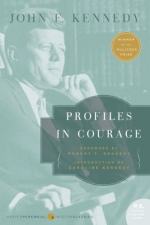 2. What senator dashed his presidential hopes by speaking out against the Ku Klux Klan?

3. What were Norris' opening words at the public meeting in Nebraska after the filibuster?

4. Who was the Senator from Nebraska who opposed President Woodrow Wilson's Armed Ship Bill?

5. Who called Taft's speech against the Nazi war crimes trials a classic example of his muddled and confused thinking?

1. What was an outstanding act of courage performed by Sen. John Tyler of Virginia?

2. Why is Ross called the man who saved a president?

3. What is some of the speculation regarding Ross' not revealing how he would vote until he cast his vote on the Senate floor?

4. What was Sen. Robert A. Taft's unrealized political ambition throughout his career?

5. What was the Armed Ship Bill and why did Norris oppose it?

7. What was the result of Lamar's appointment to oversee the recount in the Hayes-Tilden presidential vote?

8. What were Ross' feelings about the presidency that caused him to vote the way he did even though he opposed President Andrew Johnson?

9. Why did Taft speak out against the Nuremberg trials of Nazi war leaders?

10. Sen. Lucius Lamar of Mississippi entered Congress as a secessionist but after the Civil War he worked for compromise. Why?

Write a two page paper on three people you believe should be in a future book on profiles in courage.

Write an essay on your personal idea of courage. Use some example from your life or that you know about personally.

Write an essay contrasting Daniel Webster's seeing nothing wrong with taking money from special interests and Sam Rayburn's refusal to take even government money for House trips. You can look up Sam Rayburn on Wikipedia.

More summaries and resources for teaching or studying Profiles in Courage.