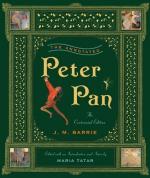 Pretend to join the Lost Boys

Break the class into groups of three or four. Have each group assign themselves identities and personalities that they would take on as part of the Lost Boys. To the girls in the class, give the option of becoming "one of the boys" or a mothering personality. List things they would have most enjoyed about their roles and have one group member read these to the class.To lengthen the fun, spend a class period using those names.

Have students use whatever artistic medium they want to create their own Neverland. Ideas include drawing a map, creating a salt relief map, writing an essay or poem, or drawing a picture. Encourage students to use their own imaginations rather than being limited only by the things described in the play.

Have students, individually or in groups, write...

More summaries and resources for teaching or studying Peter Pan.