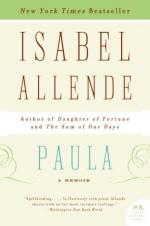 Isabel Allende
This set of Lesson Plans consists of approximately 118 pages of tests, essay questions, lessons, and other teaching materials.

2. What is important to know about Paula at this time?
(a) She has just married
(b) She is critically ill
(c) She has just graduated
(d) She is starting a business

3. The author flashes back to what time in this section?
(a) When she got married
(b) When she graduated college
(c) When her mother and brothers returned to Santiago
(d) When Paula was born

5. What was Michael's occupation when they married?
(a) College student
(b) Lawyer
(c) Librarian
(d) Engineer

1. What did Paula do prior to her illness?

3. Where does Allende's mother work to support her children?

4. Who was actually the policeman that Tio Ramon brought to the house to scare the children after they took chocolates?

5. What was Meme's special gift?

1. Why is Allende so grateful to have her mother with her in the hospital for a short while?

3. Explain the courtship between Allende and her first husband, Michael.

4. What are the details of transporting Paula to San Francisco and what is her medical state during the transfer?

5. How does Allende describe her time in Caracas?

8. How does Allende's opinion of Tio Ramon change over the years?

9. What does Allende recall about the political unrest in Lebanon where the family was living in the late 1950s?

10. What does Allende do when her daughter slips into a coma?