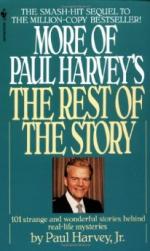 Paul Harvey
This set of Lesson Plans consists of approximately 115 pages of tests, essay questions, lessons, and other teaching materials.

Dr. Pemberton is actually a druggist who attempts to sell a syrupy headache cure to a pharmacy. One of the employees at the pharmacy adds carbonated water to the syrup and stumbles on the basis for the formula of what is now known as Coca-Cola.

2. How does Harvey describe the life of W.C. Fields?

Harvey begins with Fields' childhood and explains how he attacked his father in retaliation for being disciplined before running away. Later, he becomes a juggler and comedian, which is the combination for his vaudeville act.

3. What is the foreshadowing used in "Snow Man"?

Harry sells a horse to a neighbor, but the horse keeps jumping fences to return to him. This is a foreshadowing of the horse's eventual jumping career and winning of championships.

4. Which technique does Harvey use in "Seer Samuel"?

In "Seer Samuel," Harvey is describing Mark Twain's dreams about a tragedy involving his brother. He uses the name Samuel as a reference to Twain's original name, Samuel Clemens, so that the reader will be surprised at the ending.

More summaries and resources for teaching or studying Paul Harvey's The Rest of the Story.

Paul Harvey's The Rest of the Story from BookRags. (c)2020 BookRags, Inc. All rights reserved.