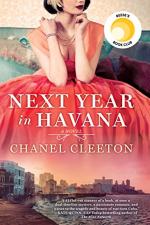 Next Year in Havana Character Descriptions

Chanel Cleeton
This set of Lesson Plans consists of approximately 148 pages of tests, essay questions, lessons, and other teaching materials.

This main character is a young journalist who was raised mostly by a grandmother and who travels to Cuba for the first time to release the grandmother's ashes there.

This character is recently deceased when the novel begins, but the reader learns more about this character's life and forbidden romantic relationship with a revolutionary once loyal to Fidel Castro through the character's flashbacks and letters.

This character is a history professor and blogger living in Cuba who is targeted by the Raul Castro regime for the critical views of the regime on the blog.

This character is a young revolutionary in Cuba at the time of Batista's overthrow in 1959. This character was, for a time, mistakenly taken for dead.

This elderly character runs a small restaurant in Havana and hails from a family that was once very wealthy and ran...

Next Year in Havana from BookRags. (c)2022 BookRags, Inc. All rights reserved.