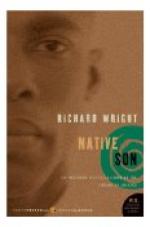 Richard Wright
This set of Lesson Plans consists of approximately 170 pages of tests, essay questions, lessons, and other teaching materials.

2. Where does Mrs. Thomas say Bigger will end up if he doesn't straighten out his life?
(a) The gallows
(b) In jail
(c) In foster care
(d) Living on the street

3. What does Bigger daydream about during the second movie?
(a) Moving out of the ghetto and into the country.
(b) Learning how to overcome race barriers.
(c) Learning how to invest money and make it grow.
(d) Learning the secret to "Getting hold of money."

4. As Bigger is leaving the Dalton home after Mary's death, what does he find near the Dalton's car?
(a) Mary's purse
(b) Mary's expensive necklace
(c) The pamphlets Jan gave him
(d) A bottle of rum

1. How does Bigger get Mary to her room without disturbing anyone?

2. On Bigger's first night at work, what does he, Mary and Jan do as they drive around the park?

3. The story is set in what decade?

5. What two words best describe Bigger in this opening part of the novel?

1. After all the gory details of the way he disposed of Mary's body, how was Bigger reacting?

2. Explain the game, "White," that Bigger and his friends played.

4. Why does Bigger get so angry and violent with Gus when he says he'll go along with the robbery?

5. Why do the Dalton's make Bigger feel so uncomfortable?

6. Why did Bigger want to kill the cat?

7. Why did Bigger help Mary to her room instead of waking her parents and letting them know her drunken condition?

8. What does it mean about Bigger "Feeling his blackness," even more after Mary Dalton and Jan Erlone's attempts at being friendly?

9. After Bigger realized Mary was dead, why didn't he even consider just telling the truth?

10. How does Bigger really feel about holding up Blum's Delicatessen?

More summaries and resources for teaching or studying Native Son.