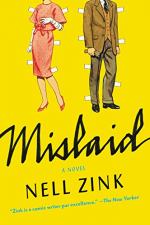 1. What is Peggy Vaillaincourt’s background?

Peggy was born to a “well-off” but “modest” family, where her father is an Episcopal priest and her mother is a housewife. Peggy’s father is proud of his lineage, having “descended from a family that had sheltered John Wilkes Booth” (3).

2. What is Lee Fleming’s background?

Lee was born into an old-money family, which now owns most of the businesses in the area of Petersburg, Virginia. After school in New York City, where he “gave his family a lot of trouble” (7) before he returned to the area and set up as the poet at Stillwater College. His family is not thrilled that he is gay, and he, having been raised with money, has a hard time living on a salary, without his family money to count on.

Lee lives in an old wood-frame Victorian opposite Stillwater College, with the lake as a kind of moat to separate it from the campus. The house was supposed to be a summer house, but his parents thought he would be safer there than in a big city: “His father suggested he move to a secluded place. Queer as a three-dollar bill doesn’t matter on posted property” (8).