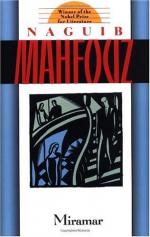 2. What does Tolba point out about the Soviet bloc?
(a) The economic upswing going on.
(b) The lack of integrity.
(c) The lack of religion.
(d) The poverty.

4. Who is Zohra with when Sarhand sees her after visiting with his friend Rafat?
(a) An old Greek woman.
(b) An elderly man who might be her grandfather.
(c) A young man about her age.
(d) A little boy.

1. What plan of Zohra's does Mansour approve?

2. What does Amer think about faith and doubt?

3. What does Mansour offer Zohra when she brings him tea?

4. Who does Mariana thwart from interacting with Zohra?

5. Where does Mansour think Zohra should do?

1. What does Mansour impulsively do when he meets Doreya at the zoo?

2. What is Mansour's further impression of Zohra and how does he feel towards her?

3. Wat does Sarhan say about the Umm Kulthum concert?

4. Describe Mansour's version of the altercation in the hallway between an unknown woman, Zohra and Sarhan.

5. What does Mansour do when he learns of Fawzi's arrest?

6. Why is Mansour at the Miramar and how does he feel about that?

7. How does Mansour react to Sarhan's announcement that he intends to marry Aleya?

8. What do Mansour and Amer discuss one night?

9. Why does Doreya say Mansour is four years too late and what is his response?

10. What does Sarhan say about Mariana when he asks to rent a room and how does Zohra act when she sees him at the Miramar?