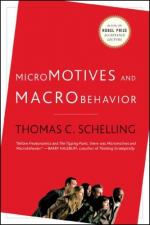 Thomas Schelling
This set of Lesson Plans consists of approximately 138 pages of tests, essay questions, lessons, and other teaching materials.

1. What does Schelling use his lecture to an audience of 800 people to illustrate?
(a) Spatial distribution.
(b) Randomness.
(c) Group dynamics.
(d) Economic theories of entertainment.

2. How does Schelling describe a decision such as choosing a seat in a theater?
(a) As a special case that cannot be analyzed using any particular interpretive framework.
(b) As something common and seemingly thoughtless that is nonetheless informed by subliminal motives.
(c) As a decision that can be predicted by mathematical laws of possibility.
(d) As a commonplace act that manifests the unconscious childhood sexual trauma of the individual.

3. What does Schelling ultimately say about a decision such as where to sit in a theater?
(a) It is a common decision that people make the same way depending on where they are in the crowd.
(b) It is not predictable but it nonetheless follows a pattern.
(c) It is neither superficial nor thoughtless.
(d) It is neither meaningful nor memorable.