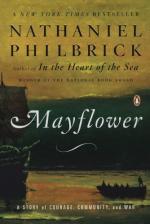 1. What event, according to the author, do most Americans associate with the birth of the United States?
(a) The Mayflower Compact.
(b) The Revolutionary War.
(c) The first Thanksgiving.
(d) Voyage of the Mayflower.

3. What governing document was drawn up before the Pilgrims went ashore?
(a) Plymouth Colony agreement.
(b) Charter of Plymouth Colony.
(c) Magna Carta.
(d) Mayflower Compact.

4. What Indian tribe did the Pilgrims befriend?
(a) Awashonks.
(b) Narragansetts.
(c) Pocasset
(d) Wapanoags.

5. Who was the leader of the tribe that the Pilgrims befriended?
(a) Andrew.
(b) Philip.
(c) Massasoit.
(d) Nipmucks.

6. What happened after more than fifty years of peace between the Pilgrims and the Native Americans?
(a) Deadly war.
(b) A trading post was established.
(c) Forts were built for protection.
(d) A permanent peace agreement.