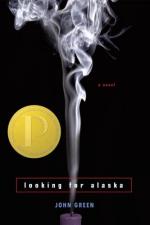 1. What kind of bottle does Takumi keep alcohol hidden in in his dorm room in "twenty-seven days after"?
(a) A Sprite bottle.
(b) A Gatorade bottle.
(c) A Pepto Bismol bottle.
(d) A Crown Royal bottle.

2. On what day of the week does Miles complete his first set of finals at the boarding school and pack clothes for the pre-prank in “three days before”?
(a) Friday.
(b) Wednesday.
(c) Tuesday.
(d) Thursday.

3. What are Chip and Alaska doing while Takumi and Miles set fireworks on the campus as a distraction in “three days before”?
(a) Lighting the Eagle's house on fire.
(b) Rigging a trap in Kevin's dorm room.
(c) Hacking into the school's computer system.
(d) Vandalizing the cafeteria.

1. What is Maxx's real name, according to Miles in "one hundred two days after"?

2. Where does Miles say Dr. Hyde taught them there were days reserved for grave cleaning where you make gifts to the dead?

3. What words are written in Alaska's favorite book that Miles finds in her dorm room in "seven days after"?

4. Who was Alaska's favorite playwright, according to Miles in "the day after"?

5. What animal bites Miles on the rear as he and Takumi flee from the Eagle in “three days before”?

1. What takes place during the game of Truth or Dare in "the last day"? What causes Miles and Alaska to wake up?

2. What information does Chip reveal to Takumi in "twenty-eight days after"? How does Takumi respond?

3. What conclusion does Chip reach after the discussion with the police officer in "thirteen days after"?

4. How does Miles explain his complicated feelings regarding Lara in "thirty-seven days after"?

5. What causes the argument between Miles and Chip in "twenty days after"? Where does Miles go after the argument?

6. What realizations does Miles make after he discovers Alaska's doodle on the wall by the phone in "sixty-two days after"?

7. How does the Eagle respond when he catches Miles smoking in "twenty-seven days after"? What do Miles and Chip do after the Eagle leaves?

8. How have Miles's thoughts about Alaska and her death evolved in "twenty-one days after"?

9. What words do Miles and Chip discover in Alaska's favorite book in "seven days after"? What do they infer from these words?

10. What assertions does Chip make regarding Miles's behavior and attitude in "thirteen days after"?

More summaries and resources for teaching or studying Looking for Alaska.