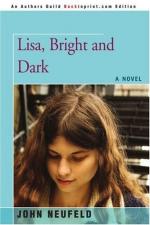 John Neufeld
This set of Lesson Plans consists of approximately 161 pages of tests, essay questions, lessons, and other teaching materials.

Use your creativity to draw a scene or setting that, to you, reflects your understanding of Lisa's mind.

Elizabeth Frazer would be played by...

Imagine you are casting the film version of the book. Which actors would you cast as the various characters?

Betsy Goodman says Cher is her favorite singer. Pick contemporary popular songs that for some reason you identify with the major characters. Explain why the song resonates with the character.

Write a country and western song, or research and identify one, that reflects Lisa Shilling's plight.

A well-known novel features only characters that are rabbits. Lets take some artistic license and replace the...

More summaries and resources for teaching or studying Lisa, Bright and Dark.