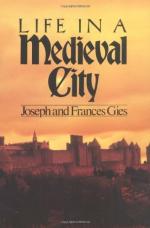 3. Prior to Roman conquest, what state is modern-day France in?
(a) It is rich and fertile farmland, populated by large plantations.
(b) It is primarily wilderness, dotted by a few small villages.
(c) It is populated with Vandals, and features several large cities.
(d) It is not inhabited by more than a few criminals and gypsies.

4. Where do the burghers get their name?
(a) From the food they sell within towns.
(b) From the commodities they deal in.
(c) From their reputation as hated money lenders.
(d) From the cities they dwell in.

Life in a Medieval City from BookRags. (c)2022 BookRags, Inc. All rights reserved.