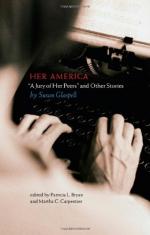 A Jury of Her Peers Character Descriptions

This is the maiden name of the suspect in the short story, who was a lively and pretty young woman.

This Iowa farmer is called on the day after the murder to participate in the investigation as a witness.

This acquaintance of the suspect for over 20 years is the only character visible for the entire story.

This young county lawyer intends to prosecute the suspect for the murder of her husband.

As a man of the law, this character's main goal is to convict the murderer.

This character's first tendency is to discourage the female witness from rushing to conclusions and tampering with the evidence they uncover in the kitchen.

This character is driven by the belief that he and his assembly of men can solve the crime of their own accord without the...